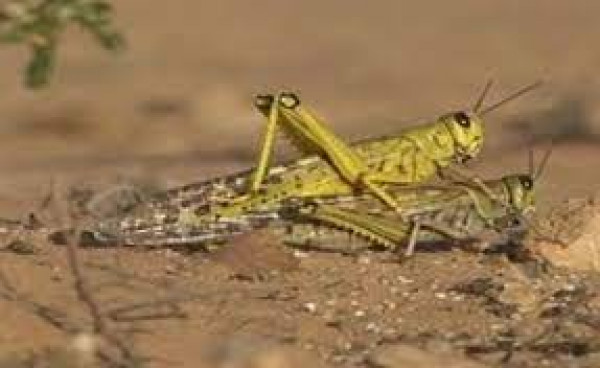 Locusts, their types and how to combat and get rid of them

Locusts, their types and how to combat and get rid of them The locust is one of the most pests that, when seen, causes screaming and has many serious damages, so I mentioned one of the strikes that the people of Egypt were struck in the Exodus. Despite that, it has undeniable benefits, so we will show you the most important thing about these insects. locust species It is one of the types of insects of grasshoppers, and scientists have found more than 20 thousand different species of them, and they may exist individually or in a group, and the most famous of them is locust • Lives in dry agricultural environment and deserts, for example Africa, Asia and the Middle East. • It is one of the most dangerous pests because of its ability to fly quickly over great distances. • It flies nearly 2000 meters above sea level, so it cannot cross tall mountains like the Atlas Mountains • She is between three and six months old red locust • A large type of them is found in Africa, especially in sub-Saharan Africa • Its name refers to the color of its hind wings. • The length of males is 60-70 mm, while the length of females is 60-85 mm • The general color of adult insects is a mixture of light beige and brown • The color of immature insects varies in different stages when they are solitary it can be green or brown when in a flock it is bright yellow and red-brown with black markings. What do these pests feed on? These pests eat plants, leaves, herbs, fruits and seeds, and when food is scarce they will feed on weak or dead grasshoppers. Fortunately, they do not bite people like mosquitoes and ticks, but unfortunately they may bite someone, but this is for self-defense. It is worth noting that these insects eat the equivalent of their weight per day. What are the benefits and harms of locusts? Advantages and disadvantages It is one of the most harmful insects because it comes in huge numbers and their numbers may reach millions and therefore they cover a large area so they destroy anything that gets in their way. A swarm covering just one kilometer can damage up to 100 tons of crops per day. It causes damage to agricultural crops such as corn, cotton and oats because they feed voraciously on agricultural crops, trees and other plants. This can destroy crops and weeds grown for people and livestock causing famine in communities that depend on their crops for survival. An excellent source of protein and according to studies, it contains 62% protein, 17% fat, and elements such as magnesium, calcium, potassium, iron and sodium. It is used in the treatment of many diseases, for example One of the most effective stimulants Treats rheumatism and back pain Helps treat developmental delays in children An effective sexual stimulant, especially for the elderly Ways to get rid of locusts animal husbandry The most effective way to control these pests is to keep chickens or ducks in your garden or farm because these animals eat locusts. garlic oil Spray plants that are trying to keep these insects away with garlic oil, because garlic oil has been found to be an effective way to naturally repel locusts. locust repellent plants Plant calendula or horehound as a barrier around the plants that these insects eat because they act as a natural repellent for locusts. Hire a specialist If you have a large number of these pests you want to get rid of, or if you are afraid of them, it is better to resort to a specialist to exterminate these insects It is one of the best companies in the Arab world • Hawally locust control company • The Ahmadi Locust Control Company • Also Abdullah Al-Mubarak Company • Locust Control Company Salmiya Also, the Jahra Locust Control Company • Mubarak Al-Kabeer Company • The Ahmadi Locust Control Company Always remember that you were harmed by these insects, but they have many undeniable benefits. In ancient times, when the ancient inhabitants of the Arabian Peninsula were attacked by locusts, they would kill and eat them by separating the head, wings and legs and leaving them in the sun to dry. Opening word locusts Meta locusts are one of the most harmful insects because they lead to the death of many people without being bitten, but the reason is that they cause many famines.